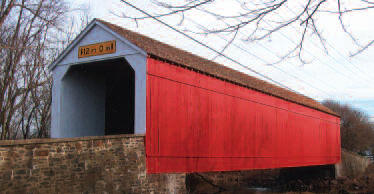 Built in 1874 and spanning the Perkiomen Creek (northeast branch), Mood’s is located just outside Perkasie, Pa. It is the fourth longest covered bridge in the county. Mood’s Bridge uses the Town Truss system. The Town Truss is sometimes called a lattice truss due to the pattern formed by the timbers.

Mood’s Covered Bridge is one of the most used bridges in Bucks County, carrying an average of 2,000 vehicles per day. Over the years the heavy use has had an impact on the structure. First known refurbishment came in 1962. Steel support beams were installed under the span in 1974. Its timbers were damaged by a truck in 1993 and Mood’s was subsequently restored, only to be struck again by a trash truck in January 2004. In June of 2004 it was almost completely destroyed by arson.

Preserving local heritage, a new replica covered bridge has been built by Penn DOT using period type framework. Fire retardant has been applied to the wooden timber members. The sign over the portal of the 2004 bridge read 11’ 2”. In a photograph taken by Henry Kenderdine in 1941, the sign stated 12’ 6”. Today the height limit is 12’ 0”, an opening more amendable for emergency vehicles.

It should be noted that a piece of the original wooden truss from the burnt bridge has been built into the new structure. Can you find it?

“It stands as a testament that sometimes progress means being good stewards of the past”
Jim Cawley, Chairman of the Bucks County Commissioners

From 313 (Swamp Rd) turn onto Branch Rd. After 1.9 mi, turn left onto Blooming Glen Rd to Covered Bridge. There is parking on the otherside of the bridge